Electronic patient file – a beacon of hope, or a damp squib?

Statutory health insurance companies in Germany have had to offer their policyholders their personal electronic patient record (EPR) since 1 January 2021. The version that was initially implemented was very rudimentary. Since 1 January 2022, the EPR has been offering significantly more functionality, and there were high expectations regarding its use. Germany’s new federal government has digitalisation at the top of its priority list. But so far, only a little more than 470,000 electronic patient records have been created, despite a potential of about 83 million users.

Private health insurance companies haven’t offered an EPR for their policyholders yet either.

Due to Covid-19, the e-prescription, the German electronic certificate of disability (Arbeitsunfähigkeitsbescheinigung, e-AU) and also the electronic vaccination certificate were often in the press in 2021, and therefore on the minds of the Germany people. Digitalising healthcare was a topic. gematik GmbH and the German Association of Private Health Insurance (Verband der Privaten Krankenversicherung, PKV-Verband) were actively addressing the issue. From autumn 2021 onwards, the buzz around these topics has already calmed down. The electronic solutions aren’t here yet. The electronic patient record isn’t actively advertised anywhere at the moment. The German federal government hasn’t made any further public statements on this for several months, except for the agreements in the German coalition agreement from 2021 (the acceleration of the EPR and the opt-out procedure for the EPR, among other things). Shortly after the new federal government took office, the crisis in Ukraine was brought to the fore. Even Covid-19 and the digitalisation of the health system that it has drawn attention to are pushed back as a result. Since the war’s effects on the people in Germany, the economy and also the world are far-reaching, this comes as no surprise.

In some cases, health insurance companies actively inform their policyholders about the possibility of applying for an EPR, though visible marketing actions on the company’s part aren’t apparent. The policyholder may still read the information, but then they quickly forget the EPR again due to current events. The EPR doesn’t help the policyholder at first and may only come into focus again when they fall ill. But do they then immediately remember the EPR again? Even the vaccination card, which was important for a while, is no longer as important at the moment.

Private health insurance is facing greater challenges with the EPR.

There is currently no provider among the private health insurance companies (PKVs) that offers EPRs to its policyholders. The pressure from the statutory health insurance companies has decreased again due to the subdued start. In 2021, many statutory health insurance companies discussed the topic with regard to the time frame and the expected increase in EPRs. The project was then slowed down by the fact that adjustments to the requirements placed on private health insurance companies still need to be made and in particular by the issue of identification via an electronic ID and the level of security ascribed to it. The unique policyholder number for each insured person, which is to be made available by the German Association of Private Health Insurance, also contributes to this. First use of the ERPs has just been postponed until October 2022 due to the lack of clearing processes. The German Association of Private Health Insurance and gematik GmbH are still tied up in various coordination processes. gematik has postponed the release 3.0 and announced a release 2.5 by 1 January 2023, which entails significantly reduced functionality.

The medical profession is also being cautious. I have yet to hear of anyone who has been approached by a doctor about the EPR. The doctor would certainly be a main point of contact because the policyholder will only address the issue if they have a concrete need. From the doctors’ point of view, the EPR initially means extra work, even if using it offers a lot of benefits in future. However, since doctors are overburdened with work, their behaviour is understandable.

To sum it up, it can be said that the electronic patient record is not a sure thing. It must be actively marketed, and the benefits for the policyholders must be made clear. At this point in time, doing so is inconvenient.

How can this change?

The EPR is coming. As soon as it’s brought back to the forefront, especially by Germany’s federal government, insurance companies will begin actively marketing EPRs and the number of them will increase significantly. Health Minister Karl Lauterbach recently confirmed the plans for electronic health records at the 126th German Medical Assembly. The trend of policyholders taking care of their health more actively on their own, which has already emerged in recent years, is continuing. Likewise, the understanding of digitalisation and its benefits will continue to increase. This and education regarding data protection concerns will break down barriers to use.

A survey of privately insured policyholders has made it clear that policyholders only want an app from their own private health insurance company. Policyholders are reluctant to use multiple apps (possibly an additional standalone EPR app). They also want more transparency regarding how benefits are processed and more functionality in their private health insurance app, such as premium refunds, deductibles, benefit submission status, insurance rate overviews and alternative insurance rates. Offering the user tailor-made services is important here, too.

So it’s important to take advantage of the opportunity presented by the slow introduction of EPRs. A future strategy for the private policyholder app must be developed taking into account the customer base and the company’s own market share. Private health insurance companies have a lot to offer, but they also have to communicate this to their policyholders. Only satisfied policyholders will recommend their private health insurance company to others.

The electronic patient record is having a dizzy spell at present. The reasons for this, however, are understandable. Nevertheless, the digitalisation of healthcare will continue to advance. The EPR, in combination with a few supplementary and administrative services, has benefits for both policyholders and private health insurance companies. The EPR will once again become more prominent in the minds of policyholders and will offer added value for all parties in future. Now is the time to align the app strategy accordingly and set up a long-term plan that’s open to the future as a result of using modular approaches.

adesso supports the digitalisation of healthcare systems in Germany in many different ways. I play a key role in driving these issues forward for private health insurance companies and am happy to make myself available for discussions. Feel free to get in touch with me! 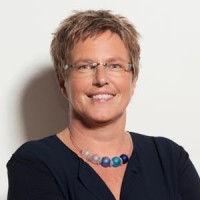 Sabine Fischer is a Programme Manager in the Line of Business Insurance at adesso with a focus on digital health offerings for life and health insurance. She has many years of experience in software development and thinks software from the end user's perspective.