Returns and their pitfalls

Mark Twain is cited as having once said, ‘History never repeats itself, but it does often rhyme.’ This quote can be applied to many situations and is also commonly used in conversations about finances and investment. This is because when interpreted a little more broadly, the quote also describes how an expected return works.

In my last post (only German), we looked at what aspects risk can entail and how we can figure out what ‘our’ own risk is. In this post, we will look at the so-called ‘return’ that we are promised from investments that involve risk.

What is a return?

The word ‘return’ is often used as a synonym for either a historical return or an expected return. These two terms are often even used synonymously in conversations. However, the names of both terms suggest different time periods.

The historical return looks at a development that has actually been realised over the period of time defined for a specific security. It describes the percentage change – also called price development or performance. Typically, the price development is shown as an annual value in order to create comparability between several investments. In this case, it is the average annual historical return. The following chart illustrates the difference between the share performance of a security that has actually been observed and the fictitious share performance, which assumes an average return. The investment shown in the chart is the German Stock Index (Deutscher Aktienindex, DAX), starting on 28 December 1989 and ending on 30 September 2022.

The significance of the average historical return (golden graph) can be described as follows. The security (in our case the German Stock Index) has changed each year (between 29 December 1989 and 30 September 2022) at an average of x per cent (+6.01 per cent, with a starting value of 1,790.37 points on 29 December 1989 and a final value of 12,114.36 points on 30 September 2022) within a specific period. The reality, on the other hand, certainly looked different, as illustrated by the blue graph: the price (and thus the value) of securities fluctuate. Sometimes they increase more (for example, by 32.12 per cent between 1995 and 2000), and sometimes less. Sometimes they fall more drastically (such as in the following years, 2000 to 2003, by -31.68 per cent), and then fall less drastically again. On average, however, the change over the entire specified period was x per cent (+6.01 per cent) per year.

As you can see, fluctuation, also called volatility, plays an incredibly important role in the valuation of a security, as does the return. But this conversation should be saved for another blog post.

When making an investment decision, we are faced with the task of assessing how a specific security might perform in specific period in future. And as anticipated, no one (at least that I know of) can predict the future. Using the historical values to make a prediction therefore seems to be the most plausible thing to do. By doing so, we suggest that what happened in the past will happen again.

We cannot take the last sentence literally in this regard, but rather we should always consider it in light of Mark Twain’s quote: history will not repeat itself in exactly the same way. But the direction it goes in will probably hold true, and in most cases, we will be able to draw parallels.

Stability is an important property of expected returns. An expected return becomes more significant if it is based on a longer history. This means that the historical return, which is based on the expected return, has a long history. As we saw in the beginning, the average historical return ‘smooths out’ the fluctuations in the price development in such a way that it is almost ‘trimmed’ into a straight line. Note: the golden graph of the fictitious price development based on the average annual historical return does not run linearly, but rather it increases exponentially due to the compound interest effect. The average historical return ‘ignores’, so to speak, the strong and weak phases that a security experiences. However, these phases of strength and weakness should definitely be taken into account. In order to be able to withstand and survive periods of weakness that have been ‘smoothed out’, having a longer history to determine a ‘stable’ historical return as a basis for the expected return is therefore just as important as having a correspondingly long future investment period.

Regression to the mean

The principle behind ‘sitting out’ phases of strength and weakness can be described by the phenomenon known as ‘mean reversion’. The psychologist Daniel Kahneman describes this in his book Thinking, Fast and Slow (cf. Kahneman, Daniel: Thinking, Fast and Slow, 2011, chapter 17 ‘Regression to the Mean’) and in doing so, refers to a training program in the Israeli military. The following observations and conclusions should not just be in the back of your mind when considering which investment decisions to make, but they should also be there when evaluating associates.

Daniel Kahneman taught Israeli Air Force flight instructors and described the principle that praise for improved performance is more effective than rebuke for poor performance. An experienced trainer then mentioned that he had observed the opposite: if he praised flight cadets for a good manoeuvre, that same manoeuvre was subsequently performed worse. If he rebuked the cadets for a bad manoeuvre, that same manoeuvre was then generally performed better. According to this, the conclusion is that punishments, not rewards, bring success.

The trainer’s observations were astute and correct: praise was often followed by disappointing performance, and rebuke was often followed by better performance. However, the conclusion from this observation was what is known as ‘regression to the mean’: the quality of all the pilots’ flight manoeuvres fluctuated. This means that they inevitably had both good and bad flights. Both were ‘slips’ – in our case, phases of ‘strength’ or ‘weakness’. If a pilot hit their ‘mean value’ right on the mark when performing their manoeuvre, then they were neither rebuked nor praised because the result was ‘expectable’. If a pilot had a downward slip in quality, it is statistically very likely that the next result would be better. A very bad flight is very likely to be followed by a better flight – and this regardless of whether the pilot was rebuked or praised. It works the other way round, too: if a pilot had a day where his performance was perfect, it was very likely that the following result would be worse. Here, too, it makes no difference whether they were praised or rebuked. Each pilot had their expected mean value, and it is statistically likely that a slip up or down will be corrected by the next attempt, so that, on average, they approach their mean value.

The goal of training should therefore be to increase the mean value and minimise the fluctuations surrounding it (in other words, the ‘size’ of the slips).

‘History never repeats itself, but it does often rhyme.’ The same goes for securities. If no unprecedented events occur, then in the long run, the mean value will be reached – even if there is a high probability that a different course will be taken to get there.

This finding can also be applied to an ‘expected return’. So when promising returns, always consider the influencing factors of stability (length of history) and unknown events. And in this setting, also think readily of regression to the mean. 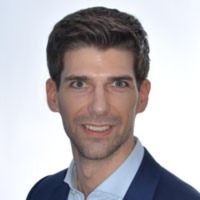 Michael Greiwe is a Senior Consultant in the Business Consulting Banking division at adesso. His work focuses on banking topics in the areas of asset management and private banking and includes the implementation of functional and technical requirements. This includes, among other things, the main topics of investment consulting and asset management.