The German Civil Status Act (Personenstandsgesetz, PStG) and the challenges it presents

In the past, people had to be registered in the birth register as male or female. However, there are people who permanently feel that they do not belong to either the male or the female gender. On 10 October 2017, the Federal Constitutional Court of Germany ruled that nobody should be subjected to discrimination because of the gender they identify as (file ref.: 1 BvR 2019/16). The legislator was obligated to create a constitutional regulation that enables this group of people to be registered as neither ‘male’ nor ‘female’ in the birth register. Accordingly, the legislator rewrote the German Civil Status Act (Personenstandsgesetz, PStG) with effect from 1 January 2019. People who do not permanently assign themselves to the male or female gender can now have themselves entered in the birth register as ‘diverse’ (‘divers’ in German) in accordance with Section 22(3) of the German Civil Status Act.

There is already case law based on the amendment to the law and presumably more will follow. These essentially say the following:

It does not matter which industry a company operates in or what type of company it is – the Civil Status Act has a major impact on it, especially its IT system landscape and its systems. If a company has still not been able to implement the legal requirements and will not be able to do so in the near future, it faces a greater risk that a (potential) customer will sue the company for damages and injunctive relief and thus incur the corresponding penalties. What is more, news and information is easily spread in the age of new media, with social media channels being a prominent vehicle for this. But it goes without saying that not everything in the media and on social media is exclusively positive. Failing to implement the requirements or failing to implement them sufficiently can quickly generate negative publicity for the company, immediately damaging its reputation. Undoing this requires a lot of effort – in other words, a lot of time and money.

Companies have to comply with the requirements of the law, taking into account the case law. They need to derive and implement measures based on this. But before a company starts this process, it should internally discuss and identify whether it wants to achieve any other goals by implementing these measures, and if it does, what those goals are. If one of the company’s goals with regard to diversity is to be perceived both internally and externally as a modern and progressive company, then it is certainly not enough to simply add ‘diverse’ as a form of address to the options on its website. But even if companies decide to do nothing more than only comply with legal requirements, they still have a lot of work to do.

Questions regarding the implementation

I would like to use an example to illustrate the questions a company might be confronted with. Let us assume that a company wants to expand the forms of address in its systems to include the ‘diverse’ option and add a non-binary form of address in the relevant documents. The company should first ask itself where it is currently using gender-based forms of address. These are usually the company’s IT systems, such as its quotation, partner, administration and printing systems, as well as on its website, in printed forms, (online/offline) forms, letters, e-mails, text modules and texts.

The (possibly outdated) system landscape and its systems needs to be analysed:

There are also a number of questions to be answered regarding internal external communication. These include:

There are also questions that need to be answered with regard to internal and external communication with the relevant target groups:

Other questions that need to be answered regarding the amount of effort involved:

As an outsider, this all looks simple to implement. But the reality has shown that this is not the case. Companies have to invest a lot of time and effort into the analysis and implementation process. Decisions have to be made, and the company needs to have the skills within its workforce or needs to acquire them. In addition, further court rulings are expected on the Civil Status Act, which will also require implementation measures.

Accordingly, a company should approach the issue in a structured and solution-oriented way. And this is best done with highly trained and experienced employees who have technological expertise and exceptional (industry) technical and business knowledge.

You will find more exciting content from the adesso world in our latest blog posts. 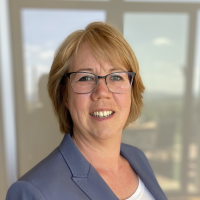 Sandra Weis is a Senior Business Consultant at adesso. She has decades of experience in project management and as a business analyst in the life insurance sector, including occupational pensions and biometrics.